So!  As it turns out, I actually finished the cover for my fourth book a little early, and in light of that development, I thought I would go ahead and make the official announcement:  Fallen Hearts is the next book in The Crucible Series!  :) 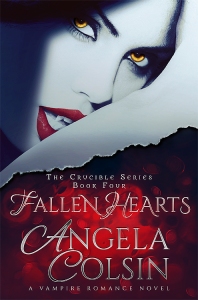 Most humans live in blissful ignorance of the supernatural, unable to see what they don’t believe exists. Such used to be the lot of Stephan Forrester, a normal mortal leading a regular life, at least until the day vampires abducted him. With his family murdered in the attack, Stephan finds himself alone and dying of an obscure, incurable illness contracted in the vampires’ lair.

Using what time he has left to seek justice, Stephan sets out to eliminate the offenders until only one remains. However, locating this final target means doing something he doesn’t think possible—actually working with a vampire.

Entombed against her will and forced to hibernate for seventy years, Maddox only awakens when a mortal with a vendetta frees her from the grave. He needs help locating the same vampire who buried her alive, and ironically, she senses a connection to her human savior in the form of a blood link. But Stephan’s intense hatred for vampires makes honoring that link impossible.

Even so, Maddox is unlike any vampire Stephan’s ever encountered. As charming and intelligent as she is beautiful, she reminds him of what it means to actually live, mending his wounded heart. In turn, Maddox finds it hard to separate from Stephan, or resist the passionate responses he elicits, and their unexpected bond strengthens as time goes on.

But time is the one luxury Stephan doesn’t have, and saving him from his illness could prove fatal to them both.

As always, I may end up tweaking a few things here or there before the book’s release because, again, I’m still pretty early on into writing.  So I thought it was a good idea to mention that this won’t exactly be available in the realm of soon.  But it’s coming, oh yes!  :D

There’s also no excerpts to share yet, but I’ll get to it as soon as I have something decidedly delectable to provide!