Light of Dawn Now Available for Pre-Order on Smashwords (Release: 08-21-15) 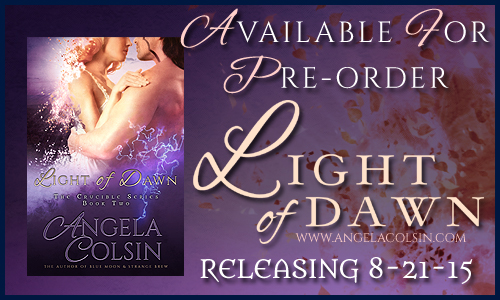 So! As you can see, Light of Dawn is now up for pre-order on Smashwords! Same price as the Amazon Kindle version, but with more availability for people who may not own a kindle ereader, or don’t prefer it as their reader of choice!

Now, I know some of you might be asking, “But Angela, why put up the second book for preorder before the first!?” Well, you’re in luck because I have an answer! :)

I’d explained some of this when I made a post mentioning that a sale I’d planned for Light of Dawn had to be canceled, and the reason was the KDP Select program that Amazon offers. All of my books were enrolled in this program, and enrollment periods last for 90 days during which you can’t offer your books through any other outlet besides Amazon. So, long explanation short, Light of Dawn is the first book to come off of it’s 90 day enrollment period, and Blue Moon is still exclusive to Amazon.

I realize this probably sounds complicated, and I apologize, but never fear! Blue Moon is going to be added to Smashwords, as is Strange Brew, but only once their enrollment periods end.

So to make things simple, here’s when you can expect to see each of them on Smashwords:

Blue Moon: Sadly, pre-order won’t be available for Blue Moon because it’s going to be the last book to come off of its enrollment period. That said, you should* see it up for grabs on Smashwords on August 6th, 2015.

Strange Brew: Will be available for pre-order after July 27th with a release date roughly around August 28th, 2015!

I’ll definitely make updates here as they come, so feel free to check back anytime! Additionally, if you want to cut out the middleman and just go straight to the source to see what’s available, check out my Smashwords profile or just visit my website! :D

*: I say “should” with the thought in mind that I have this innate ability to flub things up, such as formatting and whatnot, and wanted to make the dates approximate because of my own ineptitude! :D

Thanks so much again, everyone! I hope you’re having a great week!