I haven’t been around in a while, and I apologize for that! Believe me when I say the month of November hasn’t been entirely kind to me for more than one reason, so I’ve been laying back and trying to take it easy. But, as most of you who follow me know, I’m always working on something in the background even if I’m not actively updating it here, and I have some posts in the works as well as some announcements coming up. So! With that said, let me get to this more laid back post.

In The Final Calling, I finally got the chance to have my characters explore other worlds in my series, namely Ithelyon and Perosia. Ithelyon was first mentioned in Light of Dawn (Ulric tells Charlotte it’s his home realm) and I’d always planned to expand parts of my stories into this world, which plays a key role in the paranormal aspects of The Crucible Series’ universe. What I hadn’t done is post the map of this world up for all to see, mainly because I wasn’t quite sure I wanted to post an image without any (or many) labels.

But today, I finally got a chance to edit the map and remove several of them (they’ll be available in a future update) in order to post it here if only so everyone can see what Ithelyon looks like. This world is much like our own in many ways, temperate climates, north and south poles, and even a similar day and night cycle. A few variations exist of course (such as the existence of two moons instead of one) and I do actually have names for many locations. But I removed them from this map because I’m currently planning for my next book and I can say that we’ll be seeing a lot more of Ithelyon in Book Seven than we did in The Final Calling. 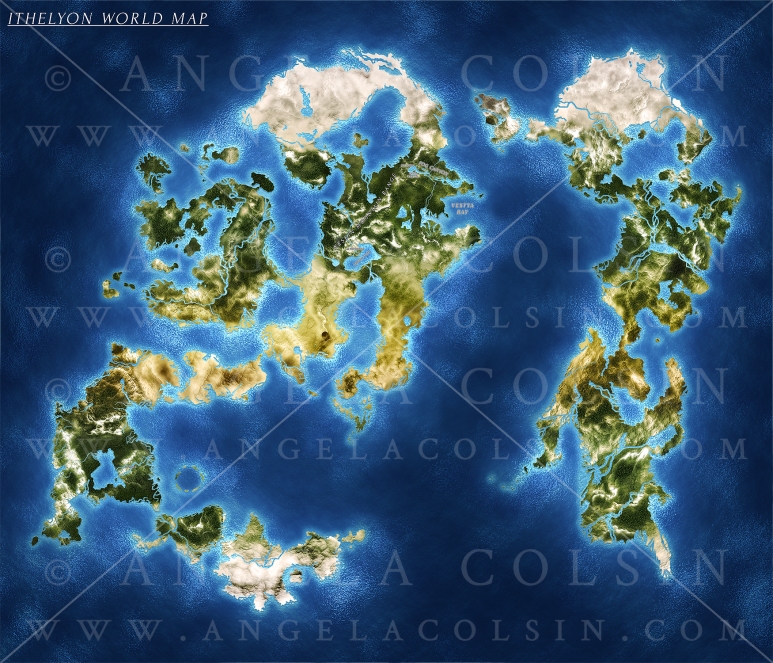 I apologize for the watermarks, I know they don’t make an image pretty! But considering this is a very incomplete map with hardly any names (and what names I left aren’t entirely legible on this resized image), I just wanted to be thorough. In any case, this map (or at least a particular region of it) is something I’m hoping to include in my next box set. We’ll see how that goes, but I just think it would be nice to have that visual aide at the back of the books. :)

I hope you enjoy this world map! And for future reference, don’t even ask me how many tutorials I had to take to make the mountain and forest textures visible on it! Hah!